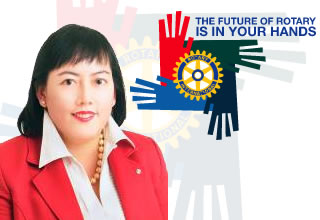 Ada is currently the Senior General Manager, Human Resources of Offshore Incorporations HK Limited (“OIL”), which is the largest and longest established company formation specialist in Asia serving professionals with worldwide incorporations.  Ada is responsible for all matters related to Human Resources for all offices within the Group, which has over 200 professional staff.  Prior to joining OIL in 1993, Ada spent 12 years in the United Kingdom and 1 year in Australia.  During her time in the UK, she gained great international exposure and experience in client relations and business development in multinational companies including Christie’s, the leading UK-based auction house.

She significantly supported to the various District Projects and contributed to the fundraising efforts including her involvement in organizing and participating at the District Fundraising Project “Gobi March” for Hepatitis B Immunization in China.  She completed a route of 15 km in the Gobi Desert (Dunhuang, China) and together with other Rotarians and participants, raised a sum of US$50,000.  She also actively participated in the Well Wishing Cards Campaign during the Tsunami Disaster.

Support to The Rotary Foundation

Ada is a great supporter to The Rotary Foundation (“TRF”) and has a passion for TRF programs especially on polio eradication.  For a second march through the Gobi Desert (Dunhuang, China), she was actively involved and participated in the Polio Fundraising Project by marching 21 km and together with other Rotarians and participants, raised a sum of more than US$300,000.

Ada volunteered for 3 National Immunizations Days (“NID”), immunizing children against polio.  She attended the NID for Polio in Jakarta, Indonesia and in Agra, India in August 2005 and November 2005, respectively.  She recently attended the Sub-NID for Polio in Bareilly, India.
Ada became a Paul Harris Fellow in 1998 and is a Major Donor (Level One).  She was the Charter Member of the Paul Harris Society and became a member of Rotary Foundation Bequest Society in 2006.

Participation in International and Regional Events

Ada received various awards and recognitions for her contribution to Rotary.  She was selected as The Best President – Fellowship of the Year by fellow Presidents.  She was awarded the President Citation at the end of her term in recognition of her efforts in achieving all the objectives she set at the beginning of the year.

She has maintained 100% attendance record since joining Rotary in April 1996.

Apart from her service in Rotary, Ada was also involved in various community service projects including serving as Chairman for The Hong Kong Ballet Group and as advisor for the Dance and Arts section for the Arts Development Council.

Ada has been involved in various roles at the Rotary District level and has undertaken many projects and activities.  This has broadened her horizons and has inspired her to take on leadership roles within Rotary.  It is through working in these roles and projects that she has learned and practiced the ideas of Rotary and continues to further the Rotary motto of Service Above Self.

District 3450 is honored to have such a committed Rotarian to be its District Governor for 2009-2010.

This entry was posted on Friday, December 21st, 2012 at 9:10 am and is filed under District Governor. You can follow any responses to this entry through the RSS 2.0 feed.Both comments and pings are currently closed.
Back to Top
Designed by Rotary District 3450