Jones C.H. Wong was born in Hong Kong on the seventh day of December 1941 when he came in the right time to join the Pacific War. After the World War II, he was well educated in Hong Kong, and now he is a successful merchant of costume jewelry — the owner of Jones Winner Corporation Ltd. which was established in 1966.

Nobody has ever challenged Jones whether he has been qualified for the first aid, but he is definitely the Command Vice President of a wing of the Hong Kong St. John Ambulance Brigade. He is decorated with the Order of St. John Association Serving Brother (SB.St.J.).

Do you know that Jones did the sky diving to celebrate his 60th Birthday? No wonder! He is the Honorary Group Captain of Hong Kong Air Cadet Corps.

Not in Hong Kong. Jones was awarded the title of Honorary Citizen by the Peoples’ Government of Zhongshan City, China, in great appreciation to his many generous contributions towards hospitals, schools, etc.

Jones joined Scouting when he was a boy. He served Hong Kong Scouting on different levels….. a regional council former chairman of The Scout Association of Hong Kong, and now the honorary president; Gold Palm member of Asia Pacific Regional Scout Foundation; Member of African Scout Foundation and World Scout Foundation; Baden-Powell World Fellowship and Benefactor. The Scout Movement motivates Jones around the globe and he does good turns on every corner of the planet Earth. His foot prints have been found in The Philippines, Thailand, Mongolia, Japan, Taiwan, Korea, Zimbabwe, Burundi, Tanzania, Belize, Australia, America, etc. He is decorated with numerous Scout medals by many national associations for his distinguish services. The medals and badges cover his head, shoulders, knees and toes.

Jones is a qualified scuba Dive Master. You are always welcome to join him in the deep blue sea water.

Of course, otherwise he may not be elected a Rotary International officer to serve District 3450 as governor. He was inducted active member by The Rotary Club of Mid-Level, Hong Kong, in 1992. Following the foot steps of our great leader Paul Harris, he was club president in 1996- 97. He then served the District as district secretary, assistant governor, RYLA camp warden, sergeant-at-arms in district conferences, chairperson of various committees. He served the district Rotary Foundation programmes as scholar advisor, GSE team leader, annual giving chairperson. He attended 8 RI conventions, 1 international assembly, 1 regional conference, 2 presidential conferences, 2 zone institutes, and gets involved with Rotary activities on different subjects almost everyday. Jones is The Rotary Foundation supporter. He is a 9-sapphire Multiple Paul Harris Fellow, and a Major Donor in 1996. Jones is now leading a district task force in promoting SARS combat.

Jones is a good father of many children. He gave birth to 2 daughters and 1 son. Queenie and Winnie were both graduated from the University of Toronto, Canada. Kelly was conferred a master degree by University of New South Wales, Australia. The queue is not yet the end. Jones has also sponsored 30 children via foster parents programmes: 5 in Po Leung Kuk, Hong Kong; 1 in the Republic of Congo via World Vision; and 24 in Zhongshan, China.

Jones is married to a beautiful charming lady, Shirley, who was a president of The Rotary Club of Hong Kong Sunrise. Now, Shirley is the governor of the Wongs. This is the exemplified Family of Rotary. 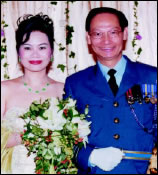 This entry was posted on Thursday, December 20th, 2012 at 9:58 am and is filed under District Governor. You can follow any responses to this entry through the RSS 2.0 feed.Both comments and pings are currently closed.
Back to Top
Designed by Rotary District 3450