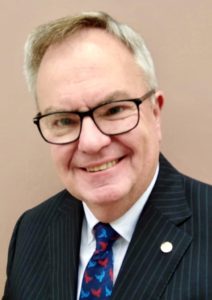 Gordon McInally joined the Rotary Club of South Queensferry in 1984, was Club President in 1991-92, and served as District Governor for District 1020 in 1997-98. He and his wife, Heather, relocated from South Queensferry to the Scottish Borders following his retirement from full-time dental practice and are both now members of the Rotary Club of Kelso where Heather is currently Club President.

He has served Rotary in Great Britain and Ireland as a committee member and chairman of most of its administrative and service committees and was R GB&I President in 2004-05. He has also served Rotary International in a number of differing capacities; as a committee member and Chairman and as a member of the RI Board from 2007-09. He was Chairman of the 2013 Rotary Institute and will repeat the role in 2020. Gordon continues to serve Rotary in varying capacities and was Chairman of the 2018 Rotary International Convention.

In his free time, Gordon enjoys watching rugby, having been a keen player in his younger years, and the occasional game of football, good food, wine, opera and other music types along with photography.

Gordon has been proud to be a Patron of the Hope and Homes for Children and is delighted that Rotary’s association with them has endured down the years.

This entry was posted on Monday, June 15th, 2020 at 12:27 pm and is filed under RCFM. You can follow any responses to this entry through the RSS 2.0 feed.Both comments and pings are currently closed.
Back to Top
Designed by Rotary District 3450