Humanitarian group passes half million dollars to WHO to vaccinate children

EVANSTON, Ill., USA (Dec. 10, 2013) — Rotary International will provide a US$500,000 emergency response grant to support efforts to quell a recent outbreak of the crippling disease polio in strife-torn Syria. The funds are the first to the World Health Organization in direct support of a Global Polio Eradication Initiative plan aimed at outbreak response throughout the Middle East, as the region gears up for a multi-country response to the threat of polio.

As of Dec. 9, there have been 17 cases of wild poliovirus confirmed in Syria since October, the first reported cases in the country since 1999. The Rotary grant to the World Health Organization will support immediate response activities in late 2013 and January 2014, such as the establishment of emergency response control rooms and initial vaccination rounds to immunize children in Syria and surrounding countries against polio.

“It is imperative that we stop this outbreak quickly to protect children in Syria and throughout the region, and that is the purpose of this grant,” said Dr. Robert S. Scott, chair of Rotary’s PolioPlus program. “Rotary and our partners in the Global Polio Eradication Initiative are working together with local health authorities to activate the outbreak response.”

He noted that the cases in Syria appear to be “imported” from Pakistan, one of three countries where the wild poliovirus remains endemic. “These and other recent polio cases in previously polio-free countries serve as stark reminders that as long as polio still exists anywhere in the world, all unimmunized children everywhere remain at risk,” Scott said.

Today, seven countries across the region rolled out vaccination campaigns aiming to reach 22 million children. These campaigns are planned to be repeated over the next 6 months to protect children in the region from the polio outbreak.

In 1988, Rotary helped launch the Global Polio Eradication Initiative with the WHO, UNICEF, and the U.S. Centers for Disease Control and Prevention. Since then, Rotary club members worldwide have contributed more than $1.2 billion and countless volunteer hours to the polio eradication effort.

Overall, the annual number of new polio cases has plummeted by more than 99 percent since the 1980s, when polio infected about 350,000 children a year. Only 223 new cases were recorded for all of 2012. More than two billion children have been immunized in 122 countries, preventing 13 million cases of paralysis and 250,000 deaths. Polio today remains endemic in only three countries, Afghanistan, Nigeria and Pakistan, although “imported” cases in previously polio-free areas – such as the Horn of Africa — will continue to occur until the virus is finally stopped in the endemic countries.

Rotary is a global network of volunteer leaders dedicated to tackling the world’s most pressing humanitarian challenges. Rotary’s 1.2 million members hail from more than 200 countries and geographical areas. Their work improves lives at both the local and international levels, from helping families in need in their own communities to working toward a polio-free world. For more information, visit rotary.org and endpolionow.org. 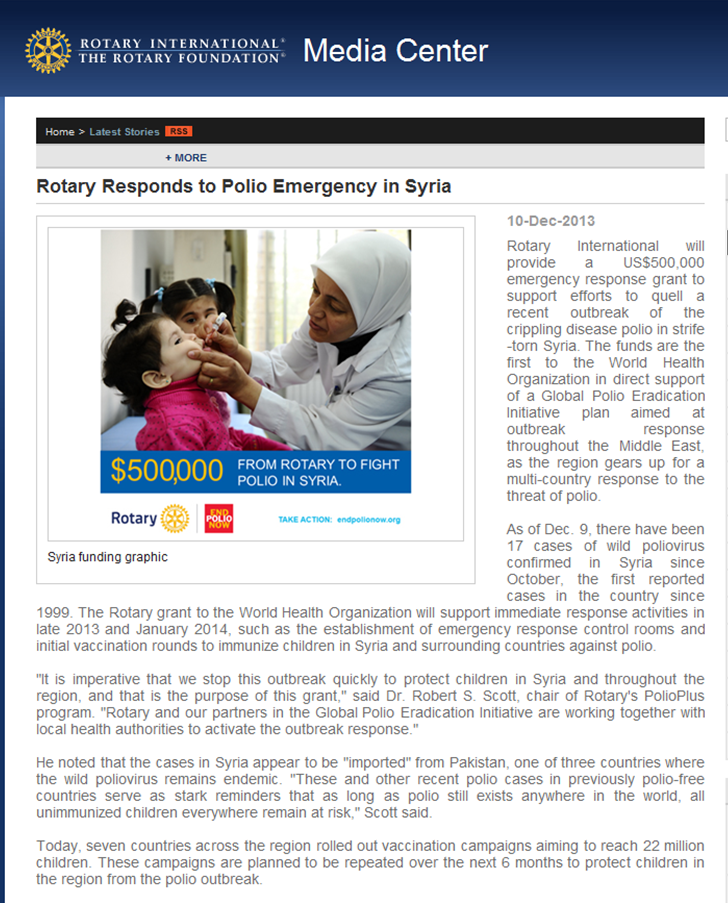 This entry was posted on Thursday, December 19th, 2013 at 3:37 pm and is filed under End Polio, Service Projects. You can follow any responses to this entry through the RSS 2.0 feed.Both comments and pings are currently closed.
Back to Top
Designed by Rotary District 3450